Print the Blank Sudoku Grid to make it easier to work out those tricky puzzles. 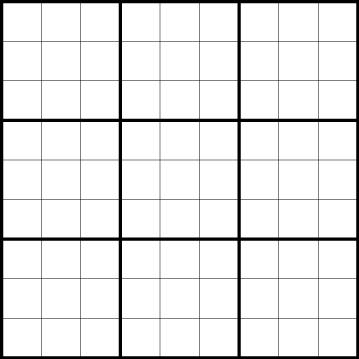 Or if you want to dowload printable word documents with more Blank Sudoku Grids.

thanks for all the free sudoku blank sheets and a make my own and publish them in a book i have never gotten them off of this site before and i reallly loved it
Comment 1 by mary tamke. Made on the 30th May 2012.

Thank you for sharing your designs. I will use them in my ESL classes.
Comment 2 by Steve Mitchell Sr.. Made on the 16th Oct 2012.

I printed two pages, one from a print preview and the other directly from your site. Both printed smaller grids over the larger ones.
Something is wrong. Otherwise, thanks. This will help me when I get into a mess!
Comment 4 by Gloria . Made on the 22nd Dec 2012.

Thanks guy's for possiblety to print blank grids to my sudoku's. Thats awsome. Keep that oppurtunity. BOA
Comment 6 by BOA. Made on the 23rd Apr 2013.

could we have a page with multiple grids?it would save a lot of printing .
Comment 7 by John. Made on the 04th May 2013.

I have been using the 4 grid per page and lost the icon and I dure do miss that. My thanks to you for helping a 86 year old pass some enjoyable time.
Comment 10 by Joe. Made on the 10th Mar 2015.

I love sudoku!!! I was addicted to regular Logic puzzles written as a story to find a winner or killer or whatever, but now it is sudoku!!!!!! I work until I find the answer.
Comment 12 by Peggy Case. Made on the 12th May 2015.

I have solved 81 magic squares 9 x 9 puzzles that I gave to myself. As I know how to solve perfect 9 x 9 magic squares, to solve the 9 x 9 Sudoku in a perfect form, i.e., diagonals too give the same; just by giving a little time, it would be quite easy to solve the 5 squares of 9 x 9 too to be solved as easily. If no objection, please give me some space where I could give you a perfect Sudoku solved inclusive of diagonals, hope I'd be allowed to type as well!
Comment 13 by Jatinder Kumar Ahooja. Made on the 05th Jun 2015.

Sudoku is a Number Puzzle that requires no mathematical knowledge. (no adding or multiplication). It is based upon Japanese style crosswords where you are required to use logic to place numbers onto a 9x9 grid.

To solve the puzzle you must make sure that every column, row and 3x3 box contains the numbers 1 through to 9. Almost all of the puzzles can be solved using logic alone and there is no need to guess. A puzzle can take from 20 minutes to 2 hours to complete depending on its level and your experience.

For a 9x9 puzzle to have precisely one solution, the initial entries need to include at least eight of the nine digits.

The smallest number of starter clues on a sudoku puzzle is 17.

Sudoku became a world hit in 2005. When measuring its popularity in enigmatic world, it is the biggest phenomenon since Rubik's Cube in the '80s.

Some people call it newspapers saver because it boosts their sales and keeps the reader audience active. Newspapers around the world embraced it immediately because people like to solve Sudoku on a daily basis, just like crosswords.

By playing it regularly you can boost your concentration and focus, prevent or ease depression, dementia and even Alzheimer's disease according to some studies.